We all know that China toys have achieved a dominant position in the world market, which brings great export volumes every year. Though under the influence of COVID-19, China toys exports is maintaining a stable growth in 2020 with the upgrading industrial chain. People know there are lots of toys markets in China. However, when it comes to Toys Manufacturing In China, generally they cannot figure out which exact place or city these toys are being made.

China toys market, like Yiwu toys wholesale market, usually serves as a platform which displays various kinds of toys for clients to buy. Toys inside are actually manufactured by factories from different cities of China and for sure, Yiwu is a one of them. Normally, each city has its own production chain and focuses on manufacturing several kinds of toys only. If you have selected toys kinds to import and want to visit related toys factories, following 10 places could be your priority.

Chenghai Toys Wholesale Market is located in Shantou City, Guangdong Province. It was the first region to engage in toys production and no doubt a very typical place for toys manufacturing in China. Here are more than 10 thousand toys factories that constitute a great production base. Compared to Yiwu, its higher raw material costs and higher labor costs sometimes result in higher product prices. Nonetheless, thanks to its strong ability of toys development, Shantou Chenghai is continuously holding a lead in high-grade toys with an abundant production chain which focuses on, 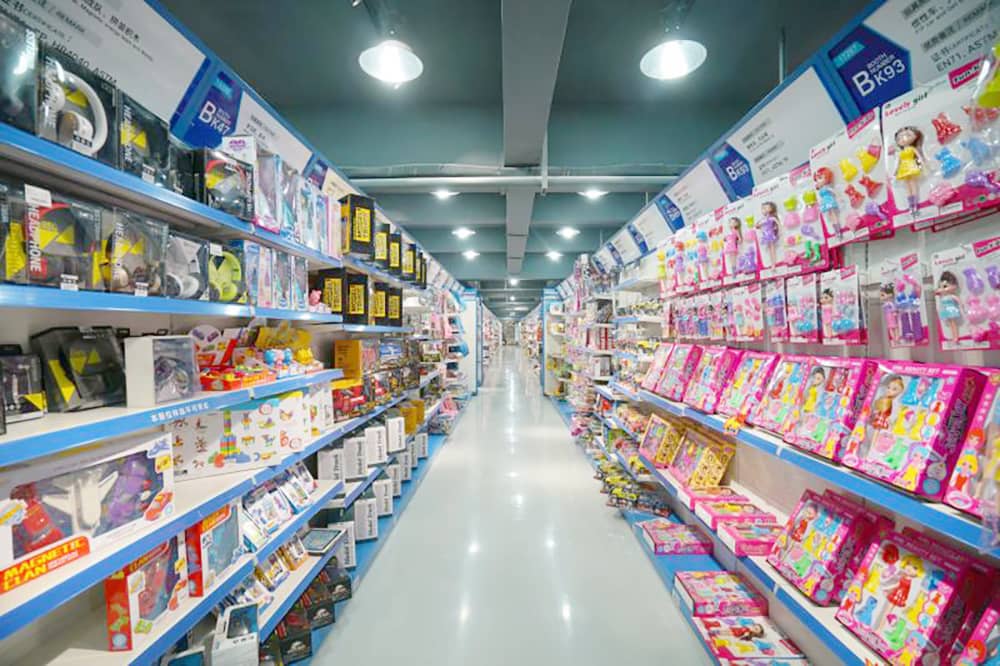 Yiwu is well known for Yiwu International Trade City, a super large commodities wholesale market. Thousands of businessmen who need cheaper but not that bad quality goods are attracted to visit and purchase every year. The market is divided into 5 districts and the toys shops are located in 1st Floor, District 1. On the top front of corridors, there are 4 signs respectively says, regular toys, electronic toys, inflatable toys, plush toys.

Basically, Yiwu toys wholesale market is a suppliers exhibition platform as I told before. Here you could find toys manufacturers from all over China. But just by looking at Yiwu’s Toys Manufacturing, the production chain focuses on, 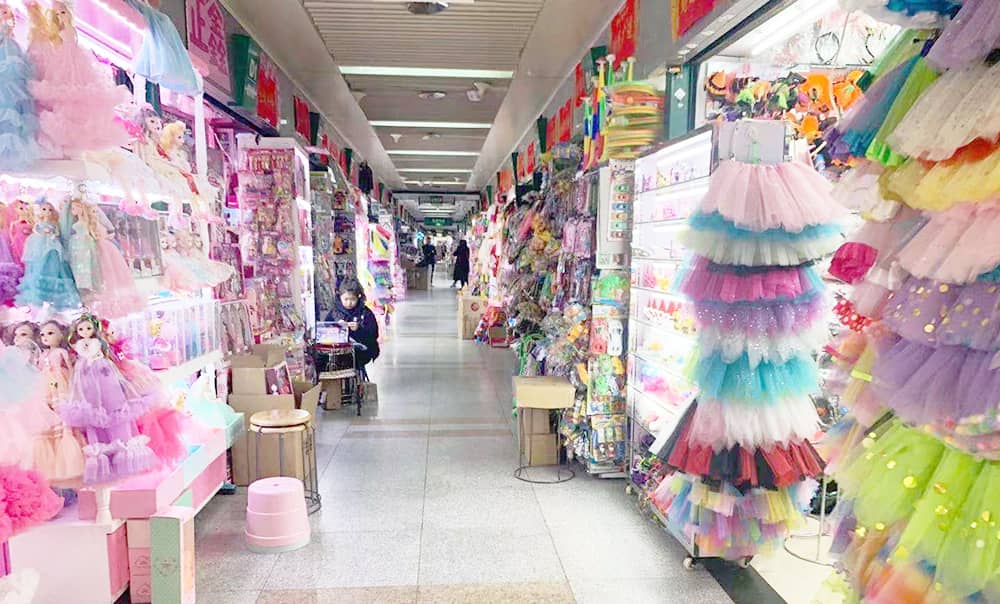 Yangzhou is famous for its plush toys manufacturing in China. Over 2000 plush toys factories here are continuously supplying plush dolls, stuffed animals, soft toys to toys importers across the world. According to the statistics, in 2006, Yangzhou even occupied 95% share of China stuffed toys export volume.

As long as you are a plush toy fanatic, you may hear Yangzhou Wutinglong International Toys & Gift City (扬州五亭龙国际玩具礼品城), a huge stuffed toys market who is covering 180,000 square meters with over 4,500 toys shops. 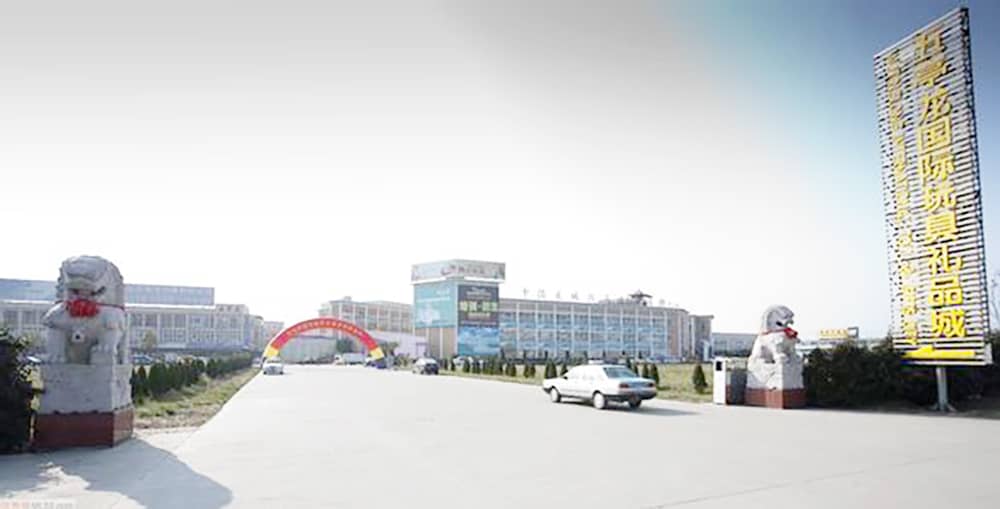 Apart from plush toys, currently Yangzhou Caodian Town (曹甸镇) is rapidly developing on its educational toys producing. During 2019, over 300 factories of this town made hundred million sales for learning toys.

Obviously, for Yangzhou City, the production chain focuses on,

Qiaoxia County is located in Yongjia District, Wenzhou City, Zhejiang Province. The educational toys industry of Qiaoxia Town began in 1970s, mainly produced teaching wall charts in the beginning, and then gradually developed into amusement toys and facilities. Now it has over 500 toys factories with an annual output value of RMB 5 billion, which takes over a large proportion of total educational toys export in China.

Therefore, in Wenzhou City, the production chain focuses on, 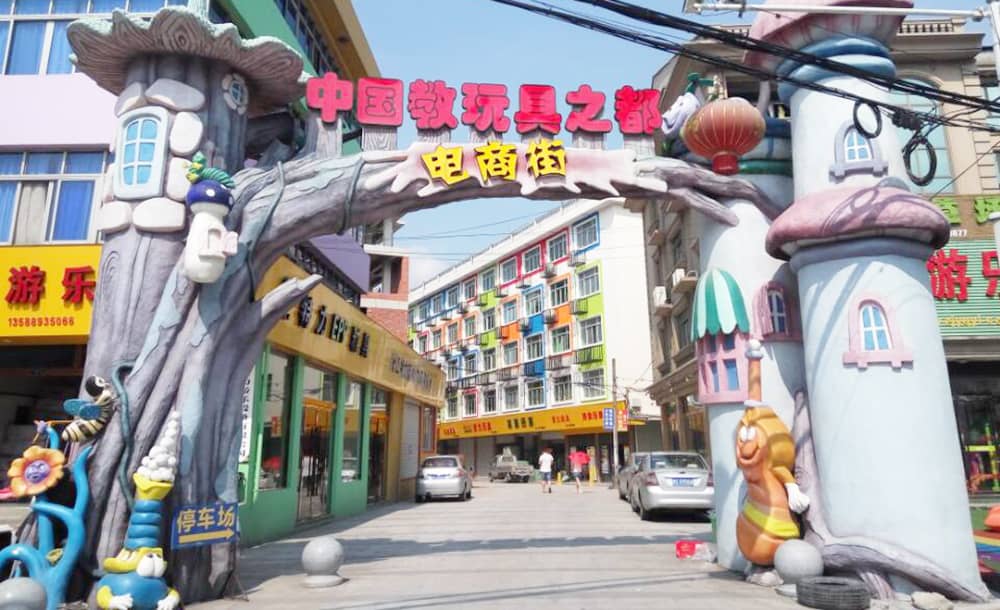 Pingxiang county is located in Xingtai City, Heibei Province. Bicycle industry of Pingxiang emerged in the late 1970s, with 30 years development, it had become the most dynamic and potential pillar industry in this county. Nevertheless, since 2000, the traditional bicycle industry got a certain influence by the popularization of motorcycles and cars. Under the big economic pressure, the factories of Pingxiang began to actively think about changes and strive to make innovation based on the original industry.

Baby vehicles, as one of the most typical and common baby products, became a new good option. Because seeing the great potential, Pingxiang companies started to incorporate the kids vehicles into their own production lines. From early baby bicycles to present new style walkers, scooters, strollers, etc, the kids vehicles industry of Pingxiang is keeping growing.

As reported by Chinese government, in 2010, Pingxiang has over 700 factories with an annual output value of RMB 500 million. Products are exported to Europe, America, Southeast Asia, Africa, etc areas. Hence for Pingxiang county, the production chain would be, 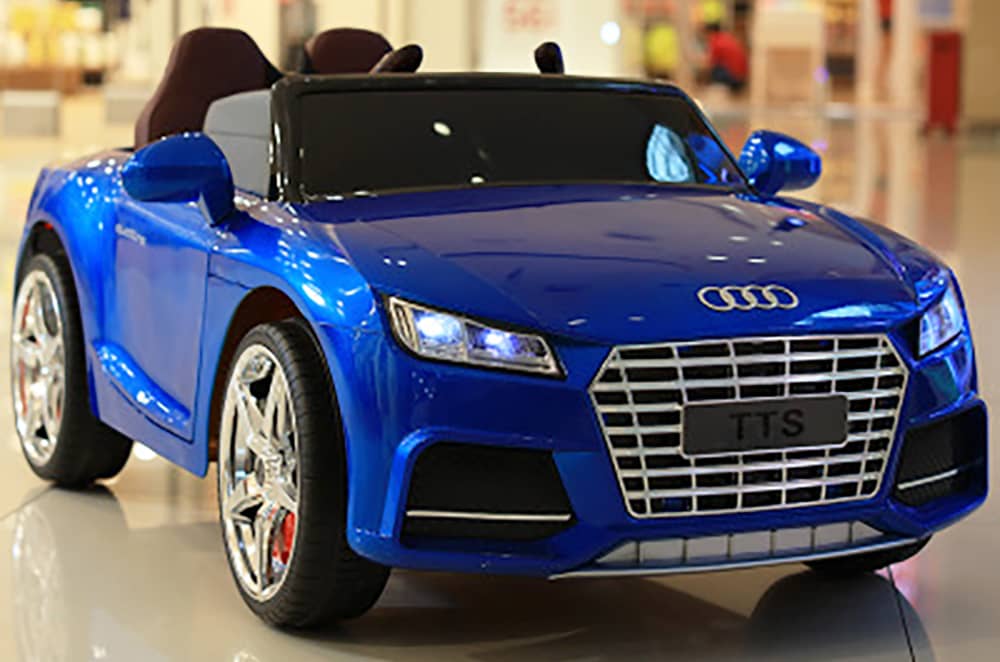 Yunhe county is located in Lishui City, Zhejiang Province. People in Yunhe are ingenious and full of imagination & creativity. Since 1976, the wooden toys industry started to flourish with the great efforts of Yunhe people. By 2003, this small country only had a population of 110,000, while at the same time there are over 500 wooden toys factories with an annual output value of RMB 1.5 billion. That accounted for 50% of China wooden toys export volume.

For the time being, there are over 1000 wooden toys companies in Yunhe and its products cover all age groups from infants to the elderly. Undoubtedly, for Yunhe county, the production chain is,

Jieyang city is located in Guangdong Province. By 2015, with an increase of 58.5%, Jieyang’s toys export volume has exceeded $400 million, which successfully swept into the leading position of Guangdong toys industry. Among that, the barbie dolls industry contributed a lot and took up a large proportion in annual output value. Until today, there are over 500 barbie dolls factories in Jieyang. Apparently, for Jieyang City, the production chain focuses on, 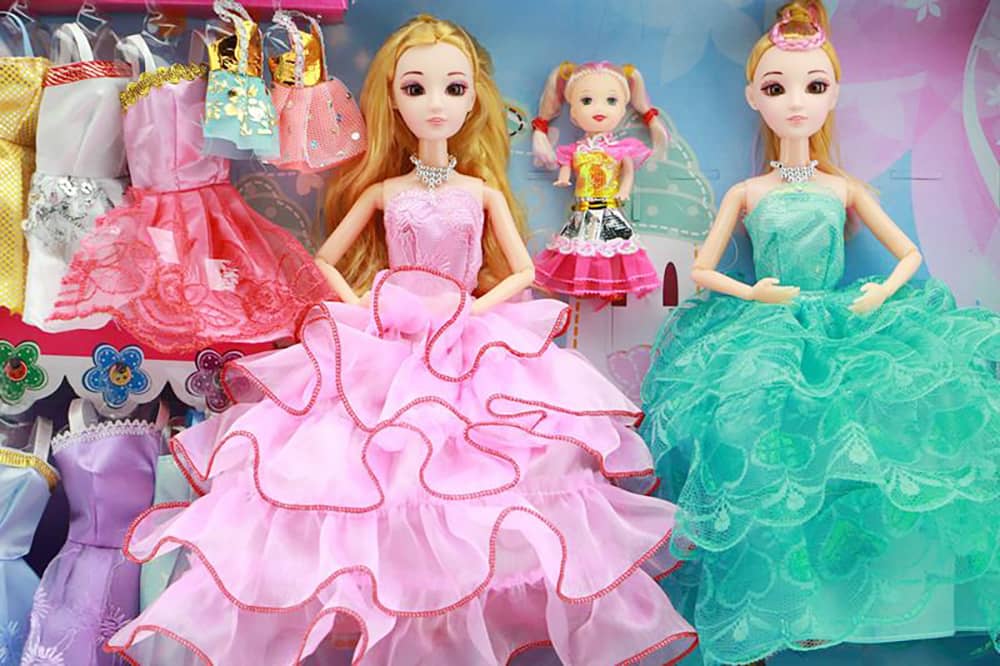 Dongguan city is located in Guangdong Province. Back in 1990s, Dongguan has already formed the toys industrial chain with more than 90% toys exported to Europe and United States. In its heyday, there were 4000 toys factories registered and another 2000 companies related to toys industry launched. According to the public data, China toys export accounts for 75% of the global market, and nearly half of them are manufactured by Dongguan factories. Hong Kong exports over HK$ 100 billion every year, among them, around 70% are made in Dongguan. This is why we called Dongguan as a veritable “World Toys Production City”.

Nowadays, Dongguan is facing weaknesses such as high labor intensity, low added value and lack of branding, which prompts its factories to seek transformation. Despite that, the professional production chain still has great productivity level and focuses on, 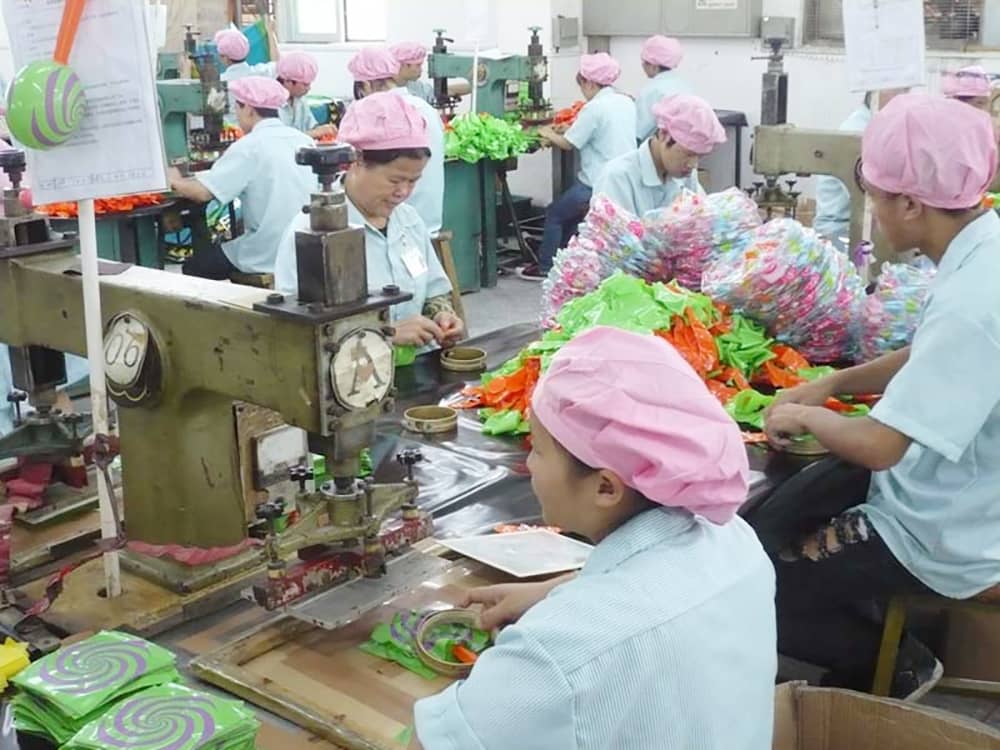 Baigou town is located in Baoding City, Heibei Province. Through last couple of years, the plush toys industry in Baigou town has developed very quickly and people there are getting wealthier. Moreover, there are more than 300 stores in Baigou Plush Toys Market and over 600 merchants across China have settled in. Meanwhile, factories in Baigou are gradually standardized and systemized, which lay firm foundations for more toys exports in near future. So for Baigou town, the production chain focuses on, 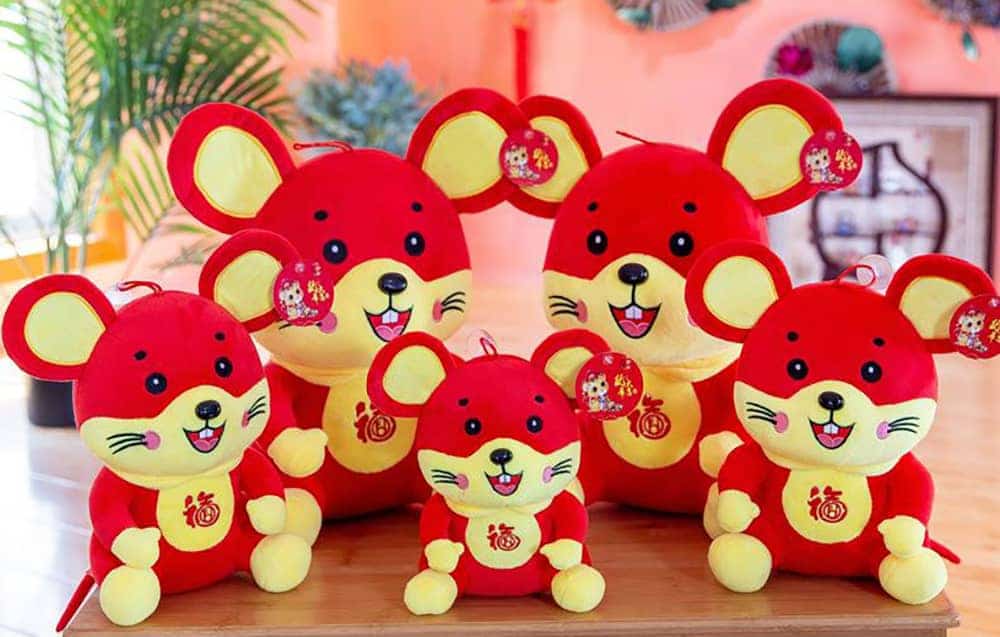 Gaomi city is located in Weifang City, Shandong Province. Historically, the plush toys industry of Gaomi started in 1990s. With years of development, the local toys factories have grown from household small workshops into independent enterprises. By 2006, Gaomi had thousands of toys companies with annual sales of more than RMB 300 million. Within 2011, Gaomi plush toys industry achieved annual income of more than RMB 1 billion and its over 1000 kinds of plush toys are becoming very popular in overseas markets.

Up to now, with the obvious product characteristics and regional advantages. Gaomi has occupied a certain market share in China plush toys industry. Thereby, for Gaomi city, the production chain focuses on,

If you are just starting toys business, I would suggest toys markets for you to reach different suppliers with diverse products. Learn how to import toys from China in this post. However, when you are experienced in toys import, or even can be an expert at couple of toy kinds, in this case, you could visit these production places and contact directly with factories.

Thanks for coming with me here. Hope this post can help you know more about Toys Manufacturing In China. Do you have any others to add or ask? Feel free to let me know in the comments.

How to Find Best Toy Manufacturers From Alibaba? The Full Guide
April 8, 2021